4 May 2021 Posted by Matthew Gore CP News No Comments

The Reverend Alan Meinzer does not have a Cumberland Presbyterian heritage, but he does have a history.  That history begins at the Trimble Campground Cumberland Presbyterian Church in Dolph, Arkansas, which Alan considers to be the place which helped him discover what it meant to be in a relationship with God and be a disciple.  It was at Dolph Alan began his first act of service, mowing the church yard.  This is something that he continues to do even today.  It was also at Dolph he discovered the joy of working beside and worshiping with fellow disciples.  At Trimble Campground in the spring of 1986, Alan felt the Holy Spirit begin to call him into the ministry, a call he accepted after much prayer and study.  It was also at Trimble Campground Alan discovered the Confession of Faith.

Alan graduated in 1987 with a Bachelor of Science in Chemistry from the University of Central Arkansas in Conway.  He then attended Memphis Theological Seminary and graduated in 1990 with a Master of Divinity.  He is very thankful for the opportunity to have been able to learn from Dr. Hester, Dr. Morrow, Dr. Knickerbocker, Dr. Brown, Dr. Cole-Turner, and Dr. Buck.  One of the many things which left an impression upon him was advice Dr. Hester gave to all the students in the class one day.  He stated, “Never go into a hospital, a home, or anywhere else for a visit without first praying.”

Alan’s first pastorate was the Palestine CPC in Lexington, Tennessee.  He served the church for eight years. Here that he discovered a lot of ministry can be done at the baseball and softball fields.  He also learned most churches just need some tender loving care.  They just need someone to lead and to work beside them. During his pastorate at Palestine Alan began working in church camps, often working three presbyterial camps a summer, while also attending CPYC.  This is a practice he continues to this day in Arkansas Presbytery. While at Palestine Alan gained the wonderful partners in life and ministry who are his wife, Beverly, and daughter, Natalie.

Alan’s next pastorate was the Faith-Hopewell CPC in Batesville, Arkansas.  He served in Batesville for eighteen years.  Here he learned he might have a gift for problem solving as he helped the congregation build a new facility.  While at Faith-Hopewell, Alan became the pastor of the Sidney CPC.  A joint ministry has always been a part of Alan’s faith journey.  He has served the Sidney CPC for over 25 years.

Alan is currently serving the Barren Fork CPC in Mount Pleasant, Arkansas.  He has served Barren Fork almost eight years.  He simply loves the opportunities he has had to work beside the people of Barren Fork.  They work hard and Alan has found it a joy to be right there beside them.

It is Alan’s hope to serve the Cumberland Presbyterian Church in whatever way God provides.  Alan is willing to serve, willing to provide leadership, willing to help solve problems, willing to do just about anything to help the church he loves.  It is his desire to be a part of the church’s future, not just here, but around the world.  We are a diverse church.  He has had the opportunity to help a Korean Church in Arkansas become a part of the presbytery.  He had the opportunity and blessing to go through the Confession of Faith with them.  It was this experience, and their acceptance of the Confession which strengthened his belief the Cumberland Presbyterian church has a bright future as a part of what God is doing in this world. 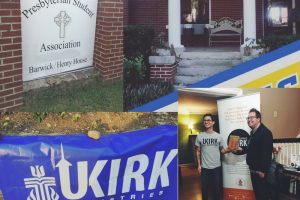 From Memphis to Chattanooga to Cookeville to Knoxville to Nashville[...]