The Rev. James Howard Kelso, 101, a member of Tennessee-Georgia Presbytery, died Tuesday, November 12, 2019. He was born May 14, 1918, in Lynn Grove, Kentucky (near Murray), to Urie and Rachel Kelso. He married Selena Azzilee Charlton, October 14, 1939. Enrolling in around 1942, James studied at Bethel College in McKenzie, Tennessee, graduating in 1945. He immediately continued his studies at the Cumberland Presbyterian Theological Seminary, then also in McKenzie. He faithfully served the Lord all his adult life as a missionary to Colombia, South America, and a minister in the Cumberland Presbyterian Church. He and his wife became a part of the Deer Creek Shores Presbyterian Church (PCUSA), Cumming, Georgia, family in 1987, where he served as an associate pastor of visitation and missions, preaching when required, until the age of 98.

James was pastor of the Cumberland Presbyterian Church in Columbia, Tennessee, when he was commissioned as a missionary to Colombia, South America, in 1947. The charge and commission were given by Dr. L.L. Thomas. The Kelso family flew from Miami, Florida, at 7:00 AM on October 21, 1948, bound for Medellin. After layovers in Cuba, Jamaica, and two places in Colombia, they arrived at6 5:00 PM. James was pastor of the churches in Pereira and Armenia, serving in many ministries. In 1956, the Kelsos returned to the United States and James pastored the Pine Tree Cumberland Presbyterian Church in Longview, Texas. In 1960, the Women’s Board of Missions announced the Kelsos would return to Columbia. The Rev. John Lovelace, a new missionary to Colombia at the time describes the Kelso’s experience:

I first met James in 1960, on a slow boat to Colombia where we were to serve as missionaries. Our two families caught the freighter in New Orleans heading for the Pacific port city of Buenaventura. During the next three years, we were together often as we worked closely as missionaries of the Cumberland Presbyterian Church. James was in charge of the construction of the large Central Cumberland Presbyterian Church in downtown Cali. He was much in demand to play his accordion in a number of churches. He was the treasurer for our mission and did a lot of preaching in different churches.

Look for an extensive obituary in the January 2020 Cumberland Presbyterian Magazine. 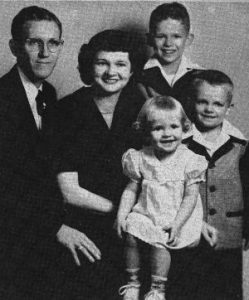