From Celebration to Sorrow…to Resurrection

As the lunar cycle would have it this year, the last stale piece of denominational birthday cake will scarcely be gone before we plunge into the season of Lent. From cake crumbs to ashes in less than a week—just like that. While such an abrupt transition could leave some folks feeling as if they’ve boarded a spiritual roller coaster, it seems to me that we’re presented instead with an opportunity to experience this proximity of our season of celebration to the Christian season of repentance as something of a gift.

It will be no revelation to anyone who has been paying attention, but the western manifestation of the Christian church has been weathering what could fairly be characterized as a dark season for the last several decades. While a few denominations may have managed to hold their own—barely—most of the rest of them, including ours, have seen precipitous declines in membership, if not interest. And in no demographic has this been more starkly evident than among young adults—those who, were it not for their avoidance of the institutional church today, would be the “elders” of tomorrow.

Theologians and church scholars far smarter than I have wrestled with questions around why this is so for some time now, and it seems that if one were to ask ten of them for their assessments, there might be a dozen different answers offered. Truth be told, there is probably no single answer—no magic formula or quick fix that will return the Christian church of early America to the position of prominence and influence it seems to have enjoyed for its first 150 years or so. And in any case, I’m not sure that that’s a goal worthy of our time and effort anyway—that is, the elevation of the institutional church to a position of political influence in a nation founded on the inalienable right of human beings to believe—or not to believe—as their conscience dictates.

Still, as Christians we take seriously the charge we’ve been given—to preach, to teach, and to make disciples of others, and rightfully so. There is good news in God’s revelation of God’s self in the world through Jesus Christ, and few if any of us would argue that the world in which we live isn’t desperate for good news. I wonder, then, if perhaps part of the problem the church has had in nurturing the interest of those outside its walls rests in the way we define “to preach” and “to teach” and “to make disciples”. Perhaps in this season of Lent, it is time for us to engage in some institutional reflection and self-examination—and maybe even a little repentance—and consider the possibility that we have allowed a sort of doctrinal atrophy to get in the way of some new things that God may be trying to do.

Maybe the mind-set we’ve employed in the preaching and teaching and making disciples with which we are charged has more often been about shaming and lecturing and arm-twisting than it has been about sharing our faith through example. Maybe we have been more concerned with dogma and timeworn interpretations of scripture than we have with being open to the guidance of the Holy Spirit as we navigate thorny questions and issues that have never presented themselves to us quite as they do today. Is it possible that we have been so busy trying to get others to accept that God can and will do new things in their lives that we have overlooked God’s attempt to do new things in new ways in our own?

The authors of a recent article in Commonweal Magazine, reflecting on the introspection in which the Roman Catholic church is currently engaged under the leadership of Pope Francis, suggested that “to deny that doctrinal development is possible [or, I would argue, development or changes in our understanding of scripture –Ed.] is to deny the possibility that the Holy Spirit might be drawing the church into a fuller apprehension of the truth.” As I see it, somewhere therein may lie a clue as to why the Christian church in the United States has struggled over the last 40 or 50 years to connect with so many in a meaningful way. Is it possible that in some respects, the “unchurched” have been more open to—or at least more easily moved by—the Holy Spirit and a “fuller apprehension of the truth” than the church itself?

It seems to me that while the 206th birthday of an institution isn’t normally considered a landmark worthy of extraordinary fanfare, the Cumberland Presbyterian church nevertheless has an opportunity this year to look inward as it never has—to consider whether the Holy Spirit might be leading us (or trying to lead us) to new understandings of how the love ordained by God is manifested in the world—understandings that we may not have fully embraced thus far. And if by resisting the leadership of the Holy Spirit into new understandings we are failing to minister as effectively as we might to a world that needs us pretty badly right now, is that not a reason for institutional sorrow and repentance?

The good news, of course, is that the sorrowful soul-searching of Lent can lead at last to resurrection. Surely the promise of resurrection into new life is as available to the institutional church as it is to each of us as individual members of the body of Christ. What better way to celebrate an anniversary of our denomination’s birth than through the contemplative disciplines of the Lenten season, listening—as a denomination—with a renewed sense of forbearance and open-mindedness for the guidance of the Holy Spirit?

Open to the Light

The New Testament tells us that in the days following[...] 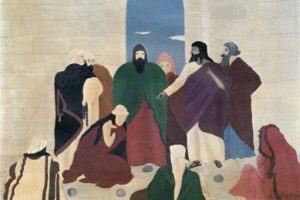 We Are So Much More

This is a sermon I preached at Bethel University Chapel[...]