Experience silence in the midst of your busy day. Take some time to relax into a time to be with God.

Now before the festival of the Passover, Jesus knew that his hour had come to depart from this world and go to the Father. Having loved his own who were in the world, he loved them to the end. The devil had already put it into the heart of Judas son of Simon Iscariot to betray him. And during supper Jesus, knowing that the Father had given all things into his hands, and that he had come from God and was going to God, got up from the table, took off his outer robe, and tied a towel around himself. Then he poured water into a basin and began to wash the disciples’ feet and to wipe them with the towel that was tied around him. He came to Simon Peter, who said to him, “Lord, are you going to wash my feet?” Jesus answered, “You do not know now what I am doing, but later you will understand.” Peter said to him, “You will never wash my feet.” Jesus answered, “Unless I wash you, you have no share with me.” Simon Peter said to him, “Lord, not my feet only but also my hands and my head!” Jesus said to him, “One who has bathed does not need to wash, except for the feet, but is entirely clean. And you are clean, though not all of you.” For he knew who was to betray him; for this reason he said, “Not all of you are clean.”

After he had washed their feet, had put on his robe, and had returned to the table, he said to them, “Do you know what I have done to you? You call me Teacher and Lord—and you are right, for that is what I am. So if I, your Lord and Teacher, have washed your feet, you also ought to wash one another’s feet. For I have set you an example, that you also should do as I have done to you. Very truly, I tell you, servants are not greater than their master, nor are messengers greater than the one who sent them. If you know these things, you are blessed if you do them.

Today we read the opening section of that part of the Gospel of John that is usually referred to as the “Farewell Discourse” of Jesus. These are the last words of instruction and prayers of Jesus to and for his disciples. But the discourse begins with Jesus not simply speaking but also acting. He washes the feet of all the disciples. The act of Jesus washing their feet is a rich and powerful image. One can easily find lots of things written about the meaning of this act. Something I have long assumed is that that since the disciples traveled by foot and they didn’t have modern walking shoes their feet were pretty nasty and hurt. Another thing that I have assumed is that despite Peter’s protests it probably felt very good to have their feet washed and it was something that they really needed. I am going to stick with those assumptions.

Jesus in this final gathering with his followers before his arrest was proclaiming the Gospel in both word and deed. In that “Final Discourse” he told the disciples things they needed to know and do. But he also showed them the way in which they were to go about their work with his act of washing their feet.

As I think about the actions of Jesus I am reminded of the old saying that has been attributed to St Francis of Assisi: “Preach the gospel at all times; use words if necessary.”

So…I wonder what opportunities each one of us might have to “preach the gospel” today? I wonder if we will need words?

Gracious God, even though I do not always acknowledge it, I know I do not live by bread alone, but by every word that comes from your mouth.

Make me hungry for this heavenly food, that it may nourish me today in the ways of eternal life; through Jesus Christ, the bread of heaven. Amen.
(Adapted from the 1993 Book of Common Worship, p. 90)

Randall McGee is an ordained minister in Red River Presbytery and a free-lance Christian Education Consultant. He and his wife, Jane Ann, live in Dallas, Texas.

Focus Be still and pay attention to your breath. Relax[...] 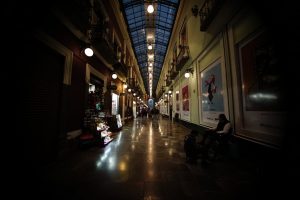 Speak Out and Give Hope Shelia O’Mara Reflection before worship:[...]