Now Jericho was shut up inside and out because of the Israelites; no one came out and no one went in. The LORD said to Joshua, “See, I have handed Jericho over to you, along with its king and soldiers. You shall march around the city, all the warriors circling the city once. Thus you shall do for six days, with seven priests bearing seven trumpets of rams’ horns before the ark. On the seventh day you shall march around the city seven times, the priests blowing the trumpets. When they make a long blast with the ram’s horn, as soon as you hear the sound of the trumpet, then all the people shall shout with a great shout; and the wall of the city will fall down flat, and all the people shall charge straight ahead.” So Joshua son of Nun summoned the priests and said to them, “Take up the ark of the covenant, and have seven priests carry seven trumpets of rams’ horns in front of the ark of the LORD.” To the people he said, “Go forward and march around the city; have the armed men pass on before the ark of the LORD.”

As Joshua had commanded the people, the seven priests carrying the seven trumpets of rams’ horns before the LORD went forward, blowing the trumpets, with the ark of the covenant of the LORD following them. And the armed men went before the priests who blew the trumpets; the rear guard came after the ark, while the trumpets blew continually. To the people Joshua gave this command: “You shall not shout or let your voice be heard, nor shall you utter a word, until the day I tell you to shout. Then you shall shout.” So the ark of the LORD went around the city, circling it once; and they came into the camp, and spent the night in the camp.

On the seventh day they rose early, at dawn, and marched around the city in the same manner seven times. It was only on that day that they marched around the city seven times. And at the seventh time, when the priests had blown the trumpets, Joshua said to the people, “Shout! For the LORD has given you the city. The city and all that is in it shall be devoted to the LORD for destruction. Only Rahab the prostitute and all who are with her in her house shall live because she hid the messengers we sent. As for you, keep away from the things devoted to destruction, so as not to covet and take any of the devoted things and make the camp of Israel an object for destruction, bringing trouble upon it. But all silver and gold, and vessels of bronze and iron, are sacred to the LORD; they shall go into the treasury of the LORD.” So the people shouted, and the trumpets were blown. As soon as the people heard the sound of the trumpets, they raised a great shout, and the wall fell down flat; so the people charged straight ahead into the city and captured it. Then they devoted to destruction by the edge of the sword all in the city, both men and women, young and old, oxen, sheep, and donkeys.

Joshua said to the two men who had spied out the land, “Go into the prostitute’s house, and bring the woman out of it and all who belong to her, as you swore to her.” So the young men who had been spies went in and brought Rahab out, along with her father, her mother, her brothers, and all who belonged to her—they brought all her kindred out—and set them outside the camp of Israel. They burned down the city, and everything in it; only the silver and gold, and the vessels of bronze and iron, they put into the treasury of the house of the LORD. But Rahab the prostitute, with her family and all who belonged to her, Joshua spared. Her family has lived in Israel ever since. For she hid the messengers whom Joshua sent to spy out Jericho.

I have studied Joshua for many years and have come to love the book. The story of Jericho has held countless children spellbound in Sunday school classes. A careful reading of the text may address some difficulties many have had with it. The word for “city” can be used of many things, including the sense of a fort, as it is here. It was small enough to march around seven times in one day. Even v. 21, with it reference to “men and women, young and old,” need not imply non-combatants but rather any who are alive in this fort. In this case, it would be only the combatants or warriors, other than Rahab’s family. The main point of the first part of the story is that Jericho’s king and his army, symbolized by the walls, have chosen to resist the ongoing work of God, symbolized by the Ark of the Covenant. In the end nothing can stop the march of God’s kingdom, neither nature (River of Jordan divides in chapters 3-4) nor humanity. The walls come down. The second part of the chapter, vv. 16-25, show that Jericho’s destruction occupies 102 words in the Hebrew while Rahab’s salvation uses 86 words; about the same number. The salvation of Rahab is as important to God as the judgment on Jericho. Even in this story, God is interested in bringing others into the fold.

Lord, open our eyes that we may see your work in our lives and the lives of those around us. Grant us grace to advance your kingdom and not to hold it back. May we see the importance of your message of salvation to be proclaimed to the world. In Jesus’ name, Amen.

Richard S. Hess is a member of Presbytery del Cristo . He and his wife, Rev. Dr. Jean Hess, co-pastor 316 Cumberland Presbyterian Church that has a Celtic style of worship, which is located in Denver, Colorado. Rick is Distinguished Professor of Old Testament at Denver Seminary, having authored various books such as, Joshua (Tyndale Old Testament Commentary), Intervarsity Press, 2008; Song of Songs, Baker, 2005; and The Old Testament: A Historical, Theological, and Critical Introduction, Baker, 2016. He is an editor of the NIV Comfort Print Biblical Theology Study Bible, Zondervan, 2018; and serves on the Committee of Bible Translation for the New International Version of the Bible.

Focus Are you tired? Take this time to rest. Relax[...] 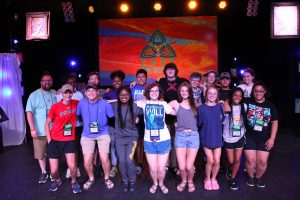 Many churches have a Youth Sunday, led by the youth,[...]