When the Philistines heard that David had been anointed king over Israel, all the Philistines went up in search of David; but David heard about it and went down to the stronghold. Now the Philistines had come and spread out in the valley of Rephaim. David inquired of the LORD, “Shall I go up against the Philistines? Will you give them into my hand?” The LORD said to David, “Go up; for I will certainly give the Philistines into your hand.” So David came to Baal-perazim, and David defeated them there. He said, “The LORD has burst forth against my enemies before me, like a bursting flood.” Therefore that place is called Baal-perazim. The Philistines abandoned their idols there, and David and his men carried them away.

Once again the Philistines came up, and were spread out in the valley of Rephaim. When David inquired of the LORD, he said, “You shall not go up; go around to their rear, and come upon them opposite the balsam trees. When you hear the sound of marching in the tops of the balsam trees, then be on the alert; for then the LORD has gone out before you to strike down the army of the Philistines.” David did just as the LORD had commanded him; and he struck down the Philistines from Geba all the way to Gezer.

David—what a leader in the faith! He was highly flawed and not always the best parent, but he was also a man who sought God, which is evident in this passage. The Philistines were on the offensive, spread out in the valley ready to defeat Israel. The battle had come to David. All of the men around him were probably sharpening their blades and creating battle plans. But David slipped off, found a quiet place, and inquired of the Lord, “Shall I go up against the Philistines? Will you give them into my hand?” He didn’t assume that God would have him fight, that God would grant him victory, or suggest his own plan of attack. David knew that God had a plan, and he was simply there to help carry out that plan.

David’s attitude is all the more remarkable when we remember that David was fighting the Philistines, the same people he defeated with a slingshot and some rocks during Goliath’s miraculous downfall. It would be so human for David to have thought, “I can handle this; I am sure that God will deliver these idolatrous people into my hands again,” but he didn’t. Instead he went humbly before God and asked what to do—twice. What a powerful reminder of how we should live our lives!

Tags: Davidprayerseeking God's will
No Comments
0

About Deborah and Russ Deaton

Russ and Deborah Deaton worship at Brenthaven Cumberland Presbyterian Church, in Brentwood, Tennessee, where they serve as elders and Sunday school teachers. They have been married for 16 wonderful years and are the parents of three children ages 11, 9, and 7. Russ is the Executive Vice Chancellor for the College System of Tennessee, and Deborah is a high school AP Psychology teacher. 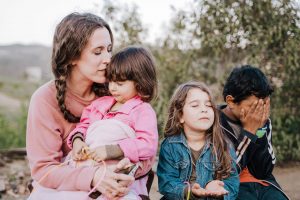 Praying for Generations to Come

Reflect How moving is it to know that Jesus, in[...]

Focus Let your soul take a moment of rest as[...]