The LORD said to Joshua, “This day I will begin to exalt you in the sight of all Israel, so that they may know that I will be with you as I was with Moses. You are the one who shall command the priests who bear the ark of the covenant, ‘When you come to the edge of the waters of the Jordan, you shall stand still in the Jordan.’” Joshua then said to the Israelites, “Draw near and hear the words of the LORD your God.” Joshua said, “By this you shall know that among you is the living God who without fail will drive out from before you the Canaanites, Hittites, Hivites, Perizzites, Girgashites, Amorites, and Jebusites: the ark of the covenant of the Lord of all the earth is going to pass before you into the Jordan. So now select twelve men from the tribes of Israel, one from each tribe. When the soles of the feet of the priests who bear the ark of the LORD, the Lord of all the earth, rest in the waters of the Jordan, the waters of the Jordan flowing from above shall be cut off; they shall stand in a single heap.”

When the people set out from their tents to cross over the Jordan, the priests bearing the ark of the covenant were in front of the people. Now the Jordan overflows all its banks throughout the time of harvest. So when those who bore the ark had come to the Jordan, and the feet of the priests bearing the ark were dipped in the edge of the water, the waters flowing from above stood still, rising up in a single heap far off at Adam, the city that is beside Zarethan, while those flowing toward the sea of the Arabah, the Dead Sea, were wholly cut off. Then the people crossed over opposite Jericho. While all Israel were crossing over on dry ground, the priests who bore the ark of the covenant of the LORD stood on dry ground in the middle of the Jordan, until the entire nation finished crossing over the Jordan.

Joshua had taken the reins of the people, chosen by God to be their new leader. He soon encountered his first challenge: water. Not unlike the time the people stood before the Red Sea, Joshua needed to find a way to the other side of the Jordan River. But how?

God always has a plan. (Isn’t that what we often say?) This time was no different. God would not leave Joshua to go it alone. Not only was God with him, but God also instructed the people to choose twelve men who will lead them, alongside Joshua. As their feet touched the water, the river parted and they began their journey into their promised homeland.

In the Cumberland Presbyterian Church, it takes those who are chosen by the people, the elders, working with the pastor, to lead a congregation. So often, especially today, we are hindered by the “waters,” which seem impossible to cross. What is our hesitation? I think often it is fear. When the chaos seems so impassible, we often panic rather than put our trust in the One who calls us. Joshua listened to God’s instructions, and trusted God. Maybe we can do the same?

Gracious God, forgive us for not listening and trusting. We so often trust our eyes, our own ideas, our own way rather than stopping to listen, to pray, and to seek your guidance. Strengthen our faith and give us courage as we step into the waters, knowing that you are with us and will get us to the other side. Amen.

Kip Rush is pastor of the Brenthaven Cumberland Presbyterian Church in Brentwood, Tennessee, and a member of Nashville Presbytery. Kip and his wife, Jodi, have two young adult daughters, Madison and Devin. 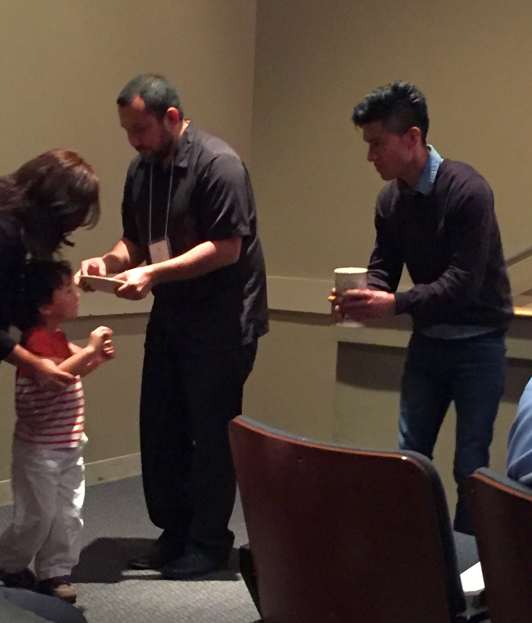 When it came to their relationship with Jesus, the Jewish[...]