Now as an elder myself and a witness of the sufferings of Christ, as well as one who shares in the glory to be revealed, I exhort the elders among you to tend the flock of God that is in your charge, exercising the oversight, not under compulsion but willingly, as God would have you do it—not for sordid gain but eagerly. Do not lord it over those in your charge, but be examples to the flock. And when the chief shepherd appears, you will win the crown of glory that never fades away. In the same way, you who are younger must accept the authority of the elders. And all of you must clothe yourselves with humility in your dealings with one another, for

“God opposes the proud,
but gives grace to the humble.”

I have been serving on the Unification Task Force to craft a plan of union for the Cumberland Presbyterian Church and the Cumberland Presbyterian Church in America. Many people ask me if I think union will happen or if I know why it hasn’t happened since we began attempting unification in 1879. One of the reasons is power. People in leadership in both denominations have feared loss of power, loss of agency, and loss of authority over groups of people. This breaks my heart. Ordination in both denominations—for ministers and elders—calls for humility and servant leadership. It is not only in our church; all we have to do is look to political leaders in our various countries to see how they use fear as a motivator. If we are afraid, they have power over us if they also claim power over that which we fear. But shouldn’t our church be different than the power structures of the world? The “chief shepherd” has reward enough for those who shepherd the people of God in ways pleasing to God.

God, we pray for our sister denominations. May we approach one another in humility and love as we discern your path for us as institutions of faith. In all our relations today, we ask you to show us where we abuse our power so that we may truly repent and live this day in a way pleasing to the Chief Shepherd. Amen.

Joy Warren is Associate Pastor at First Cumberland Presbyterian Church in Murfreesboro, Tennessee, which is in Murfreesboro Presbytery. She is trying to love and serve well, but she is not exercising. Married to a former Catholic, she understands confession, but repentance is longer in coming for this objective! 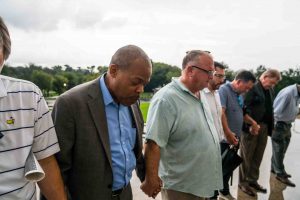 We Come Separate But Are Made One Unification Task Force[...]